DETROIT—Detroit today is a predominantly renter city. According to 2020 census data, 53% of residents are now paying renters. Sometime before 2015, Detroit changed from a majority owner city to a majority tenant city. This transition can, in large part, be attributed to a large-scale corporate takeover of houses, apartment buildings and social housing.

This change has not been peaceful. Just outside of downtown, the New Center neighborhood’s longtime residents (mostly working-class residents of color) were subjected to a protracted process of displacement in favor of better-paid young white professionals. This process took many forms, including legal and illegal attacks on residents. The Detroiters, however, are fighting back.

The recently formed New Center Plaza and Marlenor Tenants Association (TANCPM) has taken up the fight against landlords and property managers on a large scale. The members of their association spoke with people’s world on their fight.

TANCPM is in a battle with Raymond DeBates, the owner of the New Center Plaza and Marlenor buildings and an attorney whose firm specializes in real estate law. Management has changed twice in the past two years. In 2021, both buildings were administered by Golden Management, but recently a company named Continental Management took over operations.

Prior to forming the tenant association, residents resolved maintenance issues by filing complaints with the Buildings, Safety, Engineering and Environment Department (BSEED), which then issued a correctional order for multiple violations. Nevertheless, the maintenance issues have still not been resolved. In response, residents banded together to form TANCPM.

Lewis Bass, a New Center Plaza resident and founding member of TANCPM, explained why tenants formed the association, saying, “I’ve had people come to me for years complaining about the management, [saying]’We have to do something.’ We need to do something. If I go alone, you’ll see my apartment being gutted and renovated. If I’m going to present your concerns, we have to go as a group.

The TANCPM held its first meeting in 2021 to discuss the installation of Project Green Light (Detroit facial recognition surveillance) cameras, inaccessible housing due to a broken elevator, and racist rent hikes that targeted tenants. black residents and TANCPM organizers. After meeting, association members filed a notice of motion, again advising management of the unacceptable living conditions in the two buildings.

Eventually, DeBates and management began working on some maintenance issues, albeit slowly. However, at the same time, residents reported harassment from both sides, citing verbal abuse, knocking on their doors and vandalism of TANCPM leaflets. DeBates also demanded to know who informed the local news about the tenants’ problems and that the tenants stop their attempts to obtain reasonable rent and quality living conditions.

Continuing their harassment, DeBates and management threatened Lewis Bass with expulsion. Management informed Bass that his rent check had not been sent. However, he disputed the claim, citing the copy of the check he produced when sending payment. The case turned out to be frivolous and was quickly dismissed by the courts.

Bass wasn’t the only victim of a targeted displacement attempt. Management had previously assured Steve Rimmer, another resident and founding member of TANCPM, that he would not face a large rent increase. However, he then received a short-notice rental agreement in January 2022 that advised him of a rent increase of $269, a 39% increase from his previous rental agreement.

The TANCPM also reported that rent increases were larger for black residents than for white residents. Members say it is a racist strategy that seeks to weed out members of the black community in favor of white residents.

In addition to its efforts to organize tenants, the association has also reformed an old project on the street called “The Seward Sharing Table”, a community pantry that operates on the principle of “give as you can, take as You need it”. The Table is an important resource for many community members who are disabled, low income or otherwise unable to purchase quality groceries.

DeBates, upset by the potential impact the pantry could have on the appearance of grass, demanded that it be moved to a gated parking lot. He only gave The Sharing Table a few days to move. Community members gathered and announced a protest for the pantry to stay where it is. After announcing the protest, the Sharing Table was vandalized and its tables stolen; the culprit remains unknown.

Following the protest, Steve Rimmer said an employee of Continental Management informed him that the company would not interfere with The Sharing Table and that any attacks on its location had to come from DeBates himself. However, a strongly worded email from Vice President Robert Carson contradicted this claim. On the matter of relocating The Table, he had this to say:

“Disappointingly, the outcome of this simple request for lateral relocation was met, without compromise, without discussion, but with inflexibility, protest and spectacle. You then publicly made false and misleading statements. Moving is not dangerous, or less secure than the current location. If anything, it’s safer. Moving does not make the sharing table less accessible. It is also accessible because the door is open. Your location, associated behavior, and your misleading rhetoric are divisive and unnecessary.”

Carson also attempted what the TANCPM calls legal intimidation when he demanded information about all members of the tenant association. Their presumption is that there are plans to target individuals for their activism. Carson cited the Open Meetings Act, which according to its manual applies to:

“[A]any state or local legislative or governing body, including any board, commission, committee, subcommittee, authority or council, that is empowered by the constitution, statutes, charter, ordinance, the resolve or rule of the State to exercise any governmental or proprietary authority or to perform any governmental or proprietary function; a tenant of such an organization fulfilling an essential public purpose and function in accordance with the lease agreement.

A tenants’ union, in this case, is a loose, informal association of residents who have banded together to advocate for better living conditions. They do not exercise exclusive or governance functions. So the law simply does not apply. Words like these are simply meant to intimidate residents.

Despite these obstacles, TANCPM members pushed their efforts outside the bloc. Rimmer is also advocating for the right to an attorney, a local ordinance passed May 10 guaranteeing the right to an attorney for low-income residents facing eviction. A number of organizations and individuals appeared at the final hearing for the order, including The Right to Counsel Coalition, Detroit Eviction Defense, Detroit Justice Center, TANCPM, the Detroit Club of CPUSA and others.

TANCPM and The Seward Sharing Table represent two organizations that are part of the broader struggle for housing rights and food security. Their organizing efforts brought them face to face with big landlords and property management companies who attacked them every step of the way. Their struggle is unfolding at an unprecedented time for housing in Detroit, with tenants facing explosive rent hikes, racist landlords, stagnant wages and rising food prices. Their collective action serves as a shining example for tenant organizing across the country and demonstrates the kind of movement that many need. 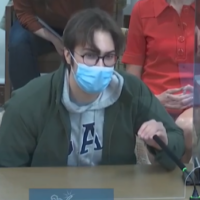